…AND FAREWELL
A melancholy event it surely was, and yet a transforming event, an exhilarating event. At the start there may have been reasons to raise an eyebrow at the choice: our spellbinding, so-easy-to-love Music Director taking his leave with a program of Stravinsky at his most solemn – austere, even – in  a collaboration with aging Wunderkind Peter Sellars that surely promised tampering, perhaps even a wholesale rewrite. At the end there was cause to marvel; this was one of the great events in Philharmonic annals, an event to think back on, to marvel at, to meditate on matters of new doors opened, to resolve that never in the future must one so blithely prejudge.
Yes, there were some fascinating acts of tampering, mostly on the part of Sellars having come up with some brilliant ways of using the space of Disney Hall. At the start of

Oedipus Rex, the first of the two works of Igor Stravinsky that made up the program, the oppressed populace of Thebes rushed across the stage, done up in working-class clothes – not motionless in choral-concert costume and formation —  and hollered their malcontentment at their King Oedipus, cowering behind them on a throne worthy of Ming the Merciless. Throughout the hour-long piece, meant by Stravinsky as a static oratorio, the action circled the space of the great Hall, continually endowing with the spark of life a piece that ordinarily simply stands still – this made possible by the hall’s vivid sightlines as well as by its acoustic clarity. Instead of the usual stand-apart narrator, Sellars had reassigned the spoken text to Oedipus’ daughter Antigone, speaking in English against the Latin of soloists and chorus and moving her down into the action. Her text, too, had undergone some Sellars treatment: not entirely  the sardonic outlook of Stravinsky’s pal Jean Cocteau but a return to some of the darker Sophocles original. Rodrick Dixon was the passionate, moving Oedipus; Viola Davis, the Antigone. Jocasta’s one great tragic aria, the fulcrum of the drama, got the full treatment – and then some – by Anne Sofie von Otter.
The Symphony of Psalms 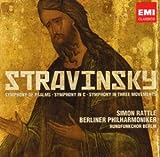 ensued, with the forces of Grant Gershon’s Master Chorale, still in street clothes, ringing the entire inner circumference of Disney Hall. (Nota bene: they were obliged to memorize the entire program.) The works are, of course, separated by two years in Stravinsky’s oeuvre, but not in Sellars’s invention, which has the disgraced and blinded Oedipus of the first drama now seeking solace and restful death at Colonus to the broad strains of Stravinsky’s “Laudate Dominum.”

And so an era ended, with a concert distinguished, marvelously performed, attended by s serious-minded audience that included a contingent of professional observers from beyond the mountains who now know the quality of this place and express it generously. A couple of nights ago I sat though the two hours of KUSC’s documentary on Salonen’s career here; the people at the station asked the right questions and played the right recordings, but most impressive was the talking by Salonen himself, the extraordinary intelligence in his own recognition of where he has come in his years here, and how he got there.  I thought of that special intelligence last night, for example, in the way he declined any ovation after the Oedipus. He and Sellars had evolved a vision that embraced that entire program, and now he was only half-way.

That’s the way I saw it, anyway. There’s more to be said.

NOT WITH A WHIMPER: The Monday Evening Concerts ended what I take to have been a successful season — their 70th, figuring their start on Peter Yates’ rooftop in 1939. Zipper Hall was, once again, jam-packed with a young and happy crowd, much of it from the Colburn School dorms across the way, and that is a very good thing indeed. Two of this season’s five concerts were similar in format to the fine old Monday Evening programs: a variorum of brave spirits. Three were given over to single composers, two of whom I could easily live without. (One of them, in fact, I DID live without, having decided some years ago that Charlemagne Palestine and I resided on different planets.) About Galina Ustvolskaya, whose music, shall we call it, took up most of last Monday’s concert, I can report that the fun factor was high, the music factor less so, and it was great to have Marino Formenti — a Monday Evening Concerts discovery, after all, in the glory days of Dorrance Stalvey — back in our midst. Something by Comrade Galina Ustvolskaya involving eight double basses, Marino conducting from the piano, a percussionist hammering on a coffin-sized wooden box and, of course, bearing the title “Dies Irae” ended the concert and sent us reeling into the California night; much of the preceding program had been of similar substance, if that’s the word. I would sincerely hope than Marino Formenti can be lured back to the next round of Monday Evening Concerts, with something more in the way of music in his luggage.

3 Responses to …and Farewell