There had been a rumor – or perhaps I had mis-heard – that Esa-Pekka Salonen’s Violin Concerto, the parting work of his Los Angeles adventure, might also include a part for a dancer or several. That didn’t happen, or perhaps it did happen well beyond our mundane field of vision. What happened instead was almost the same: music for instruments alone, but in human form;  its composer says as much. His program note, accompanying this weekend’s premiere, wanders proudly beyond the usual “first theme in the tonic modulating to the dominant” analytical stuff. It forms an eloquent, loving link between his music and the phenomenal soloist, 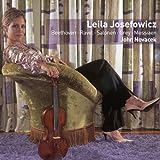 Leila Josefowicz, whose life blood it shares. There is a  kind of  remarkable humanness, in fact, that  surfaces in the two great concertos of Salonen, beyond any matter of dry-bones musical design: a sense of participation, a relationship of composer and soloist born not only out of admiration for finger dexterity but for their musical souls as well. “She knows no limits,” Salonen writes about Leila  Josefowicz, “she knows no fear, and she was constantly encouraging me to go to places I was not sure I would dare to go.” (My album notes for the recording of the 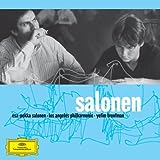 Piano Concerto were partly based on Esa-Pekka’s similar personal sketches.)
And so, as the great Yefim Bronfman lumbers toward us out of the dark reaches of his Piano Concerto, the elfin Josefowicz forms her enchantment around our awestruck ears to set this new work a-spin. Awestruck, we note: even with its ink barely dry, she had already absorbed the music by memory, and by heart. This is a big, profound work; there hasn’t been anything quite like it in a while; not a handy show-off piece as, say, Penderecki for Isaac Stern, but genuine music involving soloist and orchestra in serious discussion. The writing for violin sweeps across contemporary possibilities, from the opening rumination that seems to search out the stage from a distance, to the last notes that vanish once again into a remote world. On first hearing I am the most  moved by the slow movements: the first (of two), a restless, nocturnal, troubled dream, and the final music, which draws down to a strange, unsettled, final gleam. Salonen’s 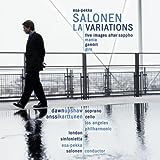 LA Variations, his coming-of-age proclamation now twelve years old, ended this way: a reaching-out into mysterious endlessness which satisfies yet disturbs. Of the Concerto’s final chord Salonen himself wrote “(It) is a beginning of something new”; as to what that might be, your guess is as good as mine
Clocks and Clouds began the program, György Ligeti’s magical, indeterminate nocturne that Salonen had only conducted here once before (plus once at the Bowl, when it got booed). This is music I adore, with marvelously, precisely trained women’s voices moving microtonally in dream-like, never-never  metaphors through clouds over an ever-ever clock-like backing of winds and percussion. There’s nothing else like it in any music I know. Beethoven’s Fifth ended the program in a grand proclamation. But this is actually music I never felt that Salonen  really got close to. (Is the Giulini/Philharmonic disc still around?)

Earlier in the week there was music by four brand-new composers, chosen by Salonen for Philharmonic commissions for his last Green Umbrella concert – curated by Steven Stucky as his final service as new-music advisor in a term also incomparably valuable. From the – admittedly incomplete – evidence, today’s young (30-ish) composers are expert at drawing unusual sounds from various assemblages of instruments, with such teeth-rattling techniques as drawing a violin bow across the edge of a vibraphone They are less good at judging the substance of a composition against the proper time to call a halt. They do not seem to have located the fun factor in contemporary composition. They might all have profited by attending to the final work on the program, the delightful show-off piece called Floof, by Esa-Pekka himself, music that had showed up at Salonen’s first Green Umbrella concert (4/15/91) and has withstood the passing of the years. Hila Plitmann, that delirious bundle of soprano who also traces the lines so wondrously in Salonen’s Wing on Wing, was on hand this time, too. Yum!

LULLABY OF BIRDLAND:  Yum, too – if an overdose of marzipan happens to be your craving – for the L.A. Opera’s latest “Recovered Voices” revival, proving merely that 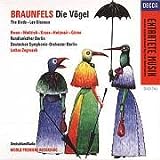 in the case of Walter Braunfels’ Die Vögel recoveries are sometimes best left unrecovered. Braunfels (1882-1954) had a distinguished career in Germany, as composer, pianist and educator, until Hitler, and was restored to favor in 1945. His The Birds dates from 1920; based on the Aristophanes satire. Braunfels later chose to introduce undertones of warning against the rising Nazi menace; the result is a weird conflation of plot elements which the score – a gooey mess of salon sentimentality possibly fished out of Massenet’s wastebasket – does nothing to untangle. There are attractive voices – notably Désirée Rancatore, a sensational coloratura soprano, lost in a dismally soporific Nightingale aria – and James Conlon’s orchestra chugs along expressively. There’s also a very fancy set: clouds and moonscapes and shining stars, the Las Vegas ballroom of your dreams which, come to think of it, a lot of the music goes with very well.

1 Response to Hail and…