THEY’RE STILL OUT THERE
The following, which the good people at Jacaranda received recently and have allowed me to send along, might be worthy of comment. At least I hope so.

Subject: Pretentious Bullshit
I just received your advertising card for The OM Century Final Concert.
Lots of “premiere” performances.  There’s a reason they are premiere
performances.  No one else was interested.
It’s simply not true that every generation has its great composers and
artists.  It’s far more complicated than that.  When was the last great
Greek play written?
Just because someone studied music, understands it, and writes in a form
that seems serious does not mean that their music is worth listening to.
You’re presenting what is largely crap that will be forgotten real fast
except by those who need some kind of identity which is intertwined with
pretentious bullshit.
And don’t think that the words “accessible” and “not as accessible” will
mask what’s going on.  The music you’re presenting is as accessible as a
Straus waltz, it’s just that it’s not worth listening to.
I’m sure Swed loves the stuff.  But then for him, anything new equals
good.
Comments, please.

KID STUFF: Jacaranda’s very large season’s finale takes place on Saturday, May 9, at Barnum Hall, which is the large auditorium of Santa Monica High School, on 4th Street just south of Pico. Something very big by Messiaen will conclude the two-year celebration of that composer’s centennial.
Something even bigger has occupied several hours of my last couple of days, the DVD on Opus Arte (distributed by Naxos) of Messiaen’s huge opera Saint-François d’Assise. Saint Francois d’Assise [DVD Video]

The production is from the Netherlands Opera, directed by Pierre Audi, — whom we know from two sublime Monteverdi productions brought here — conducted by Ingo Metzmacher: an extraordinary visual experience, a setting for this humanistic document exactly right for its character and for the message it strives to deliver.
There is no stage, in any theatrical sense. We are spectators at the periphery of a huge room, whose floorboards show their roughness. At one side is a lumber pile of discarded crosses in various disrepair; behind, ringed by scaffolding and partly visible, is Metzmacher and the orchestra. The action moves in and around these gatherings, with François, a stern, suffering figure in his rough robe of animal skins. The ecstasy of Messaien’s orchestra – the clatter of percussion and the howl of the Ondes Martenot, seems to pour down upon us. Saint François is Covina’s own Rod Gilfry, Seville’s Barber and A Streetcar’s Stanley, now a solemn and moving singing actor of rich lyricism and dignified bearing.
He cuts a distinguished figure, tall and stern, in a rough robe that sweeps the floor. (All his saintly brothers are similarly robed, but in different strong colors.)   For three hours the stage colors are mostly drab, contrasted only against the lurid yellow as the Leper makes his tortured appearance, to be cured by François’ kiss. An Angel (Camilla Tilling) comes snooping around the precincts, asking rude questions of the Brethren and drawing unsatisfactory answers. The Angel reappears in resplendent get-up, plays a viol solo and causes François to faint.
Still here?
Then comes the miracle. The stage explodes — and the music too!! – into vivid color. François addresses his worldwide convocation of birds, an enchanted gathering of children, colorfully robed, bare of foot, angelic of mien. They are Birds; armed with colored chalk they scrawl their ornithological names on the broken Crosses. They dance; they leap into François’ arms; the glorious clatter of their music is irresistible. The episode that has been an endless bore in every staged Saint-François I have seen up to now (and even drew boos at the Paris première; don’t tell me, I was there) is now transformed by stage magician  Audi into sheer enchantment.

The juvenile gathering on the cover of the Medici Arts DVD release (also from Naxos) of Janacek’s Cunning Little Vixen is hardly less enchanting These are the kids who play the Vixen’s and the Fox’s scampering offspring at the moment of the opera’s tragic end; some also are used in other animal roles earlier on. We are well supplied with versions of this powerful, moving, irreplaceable opera: a  previous version in Czech with Thomas Allen as the Fo 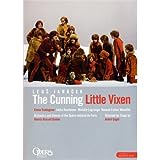 Dunbar, conducted by Kent Nagano but somewhat cut, and the creation by East Germany’s Walter Felsenstein, on which our awareness of the opera is mainly based, and which Naxos rescued and issued in an essential seven-disc collection of that legendary director’s work last year.
In this new, exellent version the action occurs, not in the forest of  Janácek’s “merry thing” but in a vast field of sunflowers: almost as good. A railroad track pierces it from right to left: humanity inflicting its misery.  Elena Tsallagova is the chestnut-crowned Vixen, wondrously svelte as she steals the heart of foxy Hannah Esther Minutillo (and us all). Michèle Lagrange is the Forester, somewhat ill-tempered for this wise and all-knowing role. (There was no-one like Rudolf Asmus, who sang it for Felsenstein.) The performance is from the Opéra de Paris; Dennis Russell Davies is the eloquent conductor. A 25-minute video  “bonus” begins with jabberwocky from the ubiquitous Gérard Mortier, but settles down to quite a nice interplay with stage director André Engel and those kids.

THE TIN CUP
This morning I sat in my doctor’s waiting room, a prisoner to Station KUSC during one of the days of its recurrent appeal for funds. The announcer, my good friend Alan Chapman, was talking about “beautiful music” and extolling the role of the station in making that substance generously available. To illustrate his talk he was playing very beautiful pieces:  Liszt’s “Liebestraum,” the “Nimrod” Variation from Elgar’s Enigma, the 18th Variation from Rachmaninoff’s “Paganini” Rhapsody, a mournful moment from Elgar’s Cello Concerto, on and on. He was running these pieces in quick order, seguing from one to the next, never allowing any one to end. All in the name of demonstrating beautiful music or…to my taste, the power of overdoses of beautiful music to drive a listener up the wall.
Some of you have asked about that word “DONATION” to the right of this blog. As with KUSC and KPCC and KCRW, I am attempting to support my work on contributions. Unlike those organizations, at the moment I have no other source of support; as  I noted in a recent report, publications running cultural criticism have been firing their writers right and left these days.
One difference: I can conduct my fund drives without changing the tone of this blog itself. I don’t have to hold readers hostage, as KUSC was doing this morning, or as KPCC was doing for two agonizing weeks last month while the country begged on its knees for news and more news. (Wellll, maybe not the country, but I did.)
David-my-Blogmaster is setting up a Paypal system the workings of which I know now not. Any day, we’ll have that tin cup out on the sidewalk.