Expectations, about what a symphony by this renowned “holy minimalist” – with a resplendent legacy of choral masterworks  to back up his reputation — 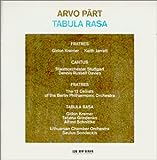 Arvo Pärt’s Fourth Symphony was one of the new works introduced by the Philharmonic earlier this year, honoring Esa-Pekka Salonen’s departure from the podium he had so long ennobled. The Symphony had its premiere on January 9. A live recording was made by Deutsche Grammophon, will be released  for download on iTunes October 22 , on disc soon after. A promotional disc is already at hand, and it’s all I’ve been listening to for the past couple of weeks. 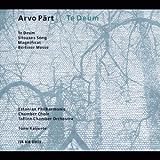 Expectations, about what a symphony by this renowned “holy minimalist” – with a resplendent legacy of choral masterworks  to back up his reputation — might sound like, might encompass, do not work very well in this context. True, the work’s scoring looks sparse : strings, with percussion and harp, but that offers no clue to the amazing, resonant sound of the music in actuality. It is 37 minutes long. Most of all, the Symphony is built on melody: long, sinuous lines that twine round one another with mounting  emotional intensity. The work opens like that: a line for the low strings, set off against against a  tortuous and tortured background for high strings that makes it seem as if everything is encased in ice. You find yourself reminded of Sibelius – not the artifice and the posing of the late symphonies, but the remarkable Sibelius Fourth, with its taciturn outlook and its gnarled melodic lines that seem to skulk around one another, its thudding, menacing pizzicatos — and to form a dark, impenetrable mass of tone.

The ending is even more  astonishing: a terse, grim procession of sound-blocks, reminiscent of the ending of the Sibelius Fifth, but with ill-will standing in for sunshine. The DG recording captures the marvelous sound of our orchestra,  gorgeously resonant in the Disney Hall space, and also the shocked silence of the audience as this powerful new music grumbled  its way to a close.

A symphony by Arvo Pärt ? A fourth symphony at that?  His first three symphonies were journeyman works, short works reflecting he influence of  the raucous side of Soviet orchestration. The new one is a great forward stride, its shimmering sonorities resounding in Disney Hall’s acoustic setting. In form, in sound and in impact it is a great, original conception.

MEANWHILE…The opera season is upon us. Siegfried is in the final rehearsal stage as I write this; L’elisir d’amore proved that, however daring the company’s plans may be, they still have a knack for good old standard  operatic entertainment.

Delicious… James Conlon’s orchestra – the winds, especially – set up a continuous twinkle, flashing a constant gleam across Donizetti’s all-knowing essay on human frailty. The cast, mostly unknown but uniformly excellent, honored Stephen  Lawless’ charming, innocent stage plans. Everybody on both sides of the footlights seemed to be having the best possible good time, myself no exception. A new soprano from Georgia (the country not the state), Nino Machaidze, was the wonderful Adina – the next Netrebko, you might say, standing tall and stately, tossing off the bel canto roulades with an ease just this side of insolence. Giuseppe Filanoti was hardly less good as the lovesick boob Nemorino. (His “Una furtive lagrima,” the aria everybody waits for, was handsomely  delivered.)  As the huckster Dulcamara  Giorgio Caoduro did not quite erase fond memories of Salvatore Baccaloni and his scenery-swallowing vocal tricks, but then, nobody can; Nathan Gunn’s Belcore was vocally okay if a little short of swagger. A minor miracle: an opera of sweet, intimate charm, spread-eagled  across the Chandler Pavilion’s vast stage, carrying the further burden of prestige as the season’s opening-night offering,  and still made to work.